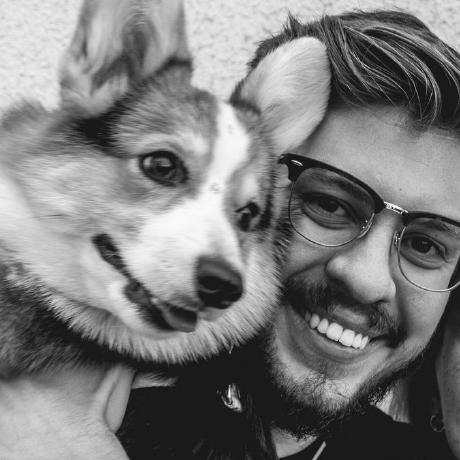 Fgsec
So long, and Thanks for All the Fish.
Posts Bypass Upload Restrictions and Evade Detection
Post
Cancel

Let’s be honest, bypassing upload restrictions is not something new and usually involves different methods to achieve the same goal: execute your 1337 code on your victim; But you can’t always do this without getting caught by the Blue Team.

On this post I’ll be showing a combination of an old technique to bypass upload restriction on ASP/.NET applications and some ways to evade detection.

It’s really common to find applications that use a deny list to restrict file extension, boiling down to a battle between your creativity and the developer’s imagination. Usually you would find that the list contains most of the “bad” extensions:

But hey, what if we use something that does not appear to be bad? Presenting: web.config. According to MS, “The web.config is a file that is read by IIS and the ASP.NET Core Module to configure an app hosted with IIS”.

Remember that I said something about an old technique? This is it! On 2014 a researcher (@irsdl) shared this technique, which I believe to be the first person to publicly write about it (don’t quote me on that) - You can read it more here: Upload a web.config File for Fun & Profit.

The technique is pretty straightforward, we upload a file named web.config that sets a special handler to interpret our own file with the ASP script processor, this will make code inside web.config be executed by IIS as a valid ASP file.

Don’t break things: It’s important to mention that things may break if you replace an already existent config file, I would recommend you to try to upload this file to a different folder than the application root. This file usually contains critical information like DB connection strings, rules to application path and so on, so be careful.

Simple “Hello World” with this technique:

Visiting this with your browser should look like the image below, note that our code was inside the “<% %>”. 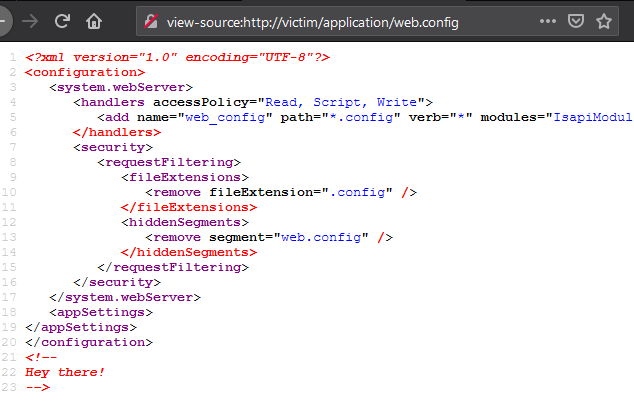 We can see our message printed right at the end, but this is not what we want, let’s abuse this to achieve remote code execution!

This step depends a lot on the security posture of the company you are testing, but lets go through what you may find.

Antivirus - The first layer and sometimes only layer of protection

Companies tend to trust a lot on AV solutions, the first thing you must deal is how to drop something on disk that wont trigger detection. From my own experience, you can pretty much combine string dictionaries, eval, execute functions to break this first layer .

Searching on the interwebs (AKA google) we find the simplest and yet functional ASP web shell: https://github.com/tennc/webshell/blob/master/asp/webshell.asp.

Adding our XML (from web.config) and removing some HTML lines resulted in the code below:

And voila.. we have a simple web shell:

But wait, are we safe to use this code already? Won’t AV solutions flag us? Yes and No!

Running the original code against VirusTotal results on 15 detections but ours a big 0.

No detection at all!

A detection on this level may be due to a couple of factors that will vary depending on the AV running on the host.

We extracted only the essential part of the original web shell, which means that the detections were probably focusing on the whole file (generally done by looking at the file hash) or specific parts of it (like a specific string contained on that script), as an AV would do with other forms of “malware”.

How AV detects your Web Shell

When your program name is more the new EICAR than a security tool https://t.co/ldZkKzgHGW

The takeaway from this:

In short, if you are trying to use something that already exists on your kali machine without any modifications, chances are you will be caught.

WAF - Nice web shell you’ve got here bro, we wouldn’t want anything to happen to it.

There is one additional defense layer not mentioned so far that could make your life a bit difficult: WAF (Web Application Firewall); Some have rules to block your attempt to upload files that may contain combination of known strings used in a web shell.

In a couple of engagements I found that you may combine the same techniques to evade both WAF and AVs. Let’s examine how this works.

With WAF bypasses I like to start with the following routine:

I always like to code some python script to help me with this task, and I usually break every piece of my payload into small strings to list the parts that will give me trouble when D-day arrives.

To illustrate it better let’s imagine that we just sent our payload and got caught by the WAF. Doing the process I’ve described we broke our code into small pieces and discovered that the word “CreateObject” triggered the rule.

What can we do about it?

String Dictionary to the rescue

We can transform our string into something that will only make sense when executed. There’s a couple of ways to achieve this and I’ll be showing you the easiest way:

With “Split()” we created a simple dictionary that can then be used to create the strings that are getting blocked. The “Execute()” acts in the same way as an “Eval()”, but in this context the code will be treated as a simple assignment statement whereas with eval it would result in a comparison (you can read more here).

Do this with every piece of “bad” string and you are good to go.

Making our payload undetectable by AV and WAF solutions should be enough to evade most detections, but more and more we see the usage of tools like sysmon to detect binaries launched by IIS and Apache.

Before going further, let’s first understand how this type of detection works.

For this, we’ll use Process Monitor and interact with our web shell.

To keep things simple, add a filter (ctrl+l) to display only entries for Process name “w3wp.exe” and “cmd.exe”:

Then, execute a simple “whoami” command with our webshell.

Eventually, you will see an entry for “Process Create” operation for “cmd.exe” from the “w3wp.exe” binary:

Examining further, we can see the executed command along with it’s parameters: 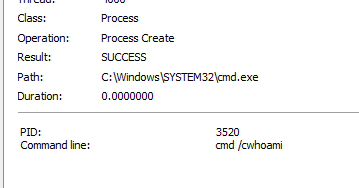 This is exactly what sysmon and some EDR solutions will look for. So there goes all the work we put into getting our code executed.

If you record from our code, we are using a reference to the “WScript.Shell” object, which is simply calling the binary passed with the “exec” method. In our case: "cmd /c <COMMAND>" - that’s why we see that “cmd.exe” is been called to execute whatever command executed by our web shell.

One may think that the simple thing here would be to replace cmd with some other binary, maybe the most recent sexy addition on the LOLBAS project, but we are essentially doing the same thing.

Let’s drop our DLL stager on disk and use rundll32 to execute it:

Aaaand…. as you can see:

We are still using “w3wp.exe” to spawn processes:

The question is, can we execute our stager directly without needing to spawn a new process?

Let’s start by introducing something that many people don’t know: ASP Classic is essentially a server-side script engine that uses VBScript as it’s default scripting language.

With DotNetToJScript we can not only create payloads for JScript but also for VBScript, and that’s exactly what we’ll be doing.

To start, you can clone the repository directly from github and open it with Visual Studio.

You can use an already existing example project “ExampleAssembly” that comes inside with the tool, and write the necessary code for your reverse shell or go even further and use Win32 API to inject shell code for your favorite C2 implant.

I’ll be doing something simple for this post and write a file to disk: 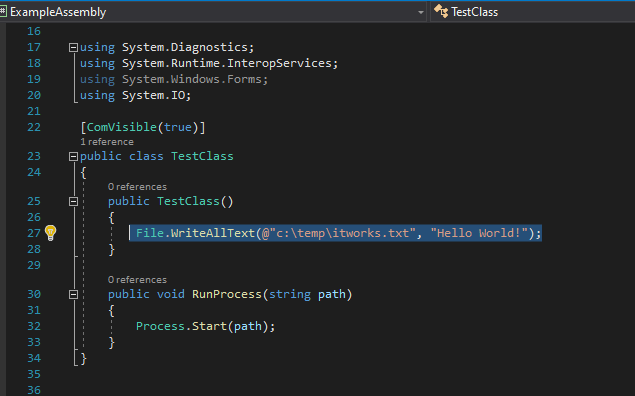 Now, rebuild the entire solution… and we should have both DotNetToJScript binary and ExampleAssembly DLL ready to go.

Since we are using the TestClass example that comes with the tool, we can execute the following command:

The first parameter (ExampleAssembly.dll) is our payload created in the last step, then our output location and some options. I recommend you testing the best option for you, since this may variate accordingly to your target, but --ver=None will result in a version without “WSCRIPT.SHELL”, which is exactly what we want.

Since we are going with the default script engine, VBScript, we are passing --lang=VBScript.

And that’s it, just copy and past to our “web.config” and execute it:

As expected, after execution the file is created:

Now, back to process monitor.. if we filter only “Process Create” operations and run our web shell again, we get 0 results: 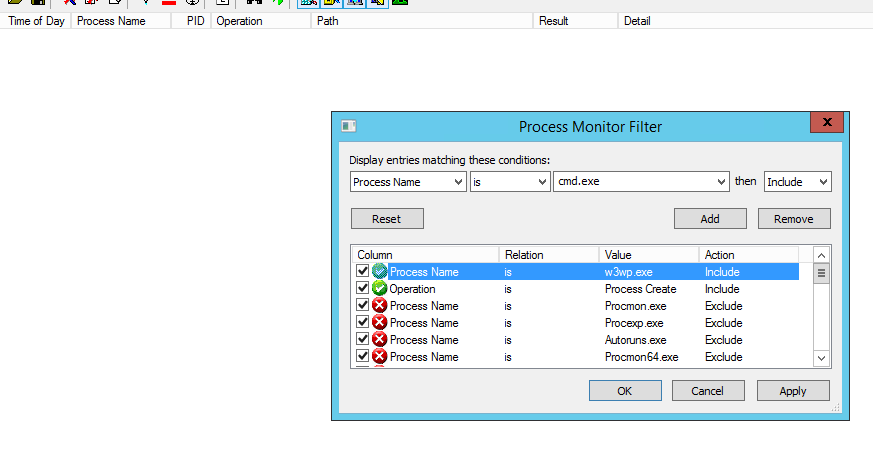 Now, you may think that we are done.. but we are not. (cry face)

Remember from “Step 2” that some AVs may create detection based on the usage and pattern of known malicious files and scripts?

We could try to apply what I’ve showed so far, but let’s learn another useful technique to avoid detection.

Can you pls execute my code sir?

Sometimes the best way to avoid detection is to use something that is not malicious at all. Our payload has multiple objects to functions that reveal our intend, from the moment we drop it on disk we give a chance for security solutions to trigger detections and even permit responders to act on it.

So let’s create something that will serve as a stager for our payload, the easiest way to achieve this is to have enough code to receive and execute our code directly into memory.

Since we are using classic ASP, we can receive our payload using the “Request()” function, decode it’s Base64 content and execute with a combination of “Execute()” and “Eval()”.

We can use any b64 encoded payload we want and get it executed through our web shell stager:

This post aims to describe and provide example code on how you can dynamically resolve syscalls using only C#. What are System calls? TL;DR: System calls or just syscalls are used by applications...

This is a quick post to show how you can inject your .NET assembly code to unmanaged processes. Generate the ShellCode As an example, I will be using a Mythic implant. But feel free to develop yo...

From CSRF to RCE

A few days ago I started taking interest in Bolt, a content management that quoting from its github, is a “Sophisticated, lightweight & simple CMS”. The team behind it really did a great job i...

From CSRF to RCE